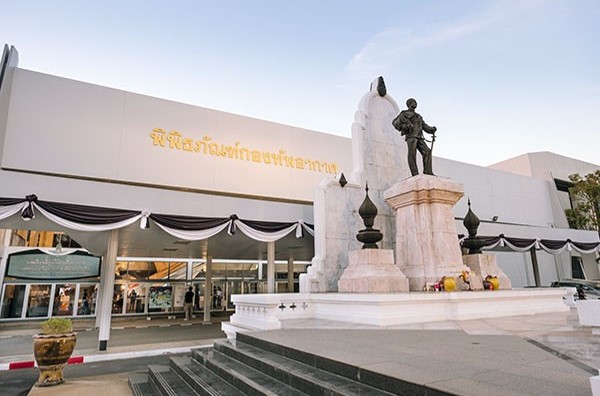 The Royal Thai Air Force museum is located on Phahonyothin Road, in Don Mueang District of Bangkok. The museum, under the Air Force History and Museum Department, displays retired aircrafts such as attack aircrafts, military transport aircrafts, fighter aircrafts and helicopters. There are some of the aircrafts that are the only of its kind left in the world and there is also the first aircraft designed and built in Thailand. The museum has been divided into five buildings. Building 1 is separated into two sides. The left side displays various types of military aircrafts which were functioned in Royal Thai Air Force in the past, the aircraft designed and built by Thai, the exhibition on Thai aviation history, and the “100 years of Royal Thai Air Force Forefather’s Aviation” exhibition. There are also displays of aircrafts such as Nieuports, Breguets 3, O2U Corsair, Hawks 3 and etc. In the right side of Building 1, apart from the displays of high calibre aircrafts, it features “The Jet Fighter” spectacle, 7 rounds a day, from 9.00 a.m. to 15.30 p.m. Building 2 exhibits the important aircrafts in Thai aviation history such as “Baribatra” bomber aircraft, the first aircraft that was designed and built by Thai people. There is also a library of aviation history here in Building 2. Building 3 is a maintenance building while Building 4 displays tools and equipment used in aviation, Thai Air Force uniforms from past to present, Hypobaric chamber that simulates low ambient air pressure for education. Building 5 features various kinds helicopters such as the Bell 212, a royal helicopter. The Royal Thai Air Force Museum opens daily from 8.00 a.m. to 16.00 p.m. (except on holidays and The Royal Thai Armed Forces Day) with free entrance. If you travel by private car, take the Phahonypthin Road, outbound, passing Saphan Mai market, Thai Air Forces village and the Royal Thai Air Force Academy. At the Chandrubeksa intersection, you will see the museum’s sign on the left. If you travel by public transportation, take a bus no. 34, 39, 114, 356, 3, 21, 22, 24, 25, or 39. For more information, contact 02-534-1854 or 02-534-1764. Please contact in advance of your visit.