Chakri Monument Park is situated at Prakhonechai District which is nearby Khao Kaen Chan on Phetkasem road. It is a public park where the monument of King Rama I placed. It is a public park that most of the locals always come over for a relaxation. People mostly go up to the top to see the panorama views and as well to pay homage to the Buddha image up above. The foothill area is where the monument situated. It has been believed that anyone paid homage to the monument of King Rama I, they will get a chance to be the best in the government field and have a warm family.Ratchaburi people cooperated together in order to build the monument to commemorate the 200 anniversary of Rattanakosin city. This is because King Rama I has many things related to Ratchaburi city. His Majesty used to work in the government service in Ratchaburi before during late Ayuttaya period in the reign of King Ekatat. Later in the reign of King Taksin Maharaj, King Rama I got to serve the role of army leader and confronted with Myanmar troops in Bang Kaew Sub-District, Photharam District, Ratchaburi. His Majesty won over the Myanmar troops that time and later when he succeeded to the throne, his majesty cooperated with Somdej Phra Anuchatiraj to fight with another Myanmar troop of Phrachao Pradung during Kao Thap War in Thung Khao Ngu, Ratchaburi District and yet got another victory. Also, his majesty ordered Kromluang Thephirak and the army leader to attack Chiang Saen (Chiang Saen District which is presently called Chiang Rai province) and to herd all the Taiyuan people to relocate to Ratchaburi city on the right side of Mae Klong river. Later, these people relocated to Khu Bua District, Ratchaburi and other districts of Ratchaburi as well. They have become the main population of Ratchaburi nowadays.After the renovation of the public park, it was given the name ‘Chakri Monument Park’. Nowadays, it is the park that opens for everyone to come over for relaxation and as well to exercise. Also, there are many restaurants situated nearby the park. 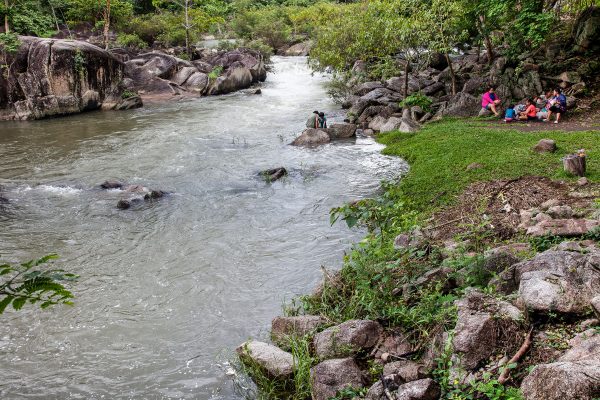