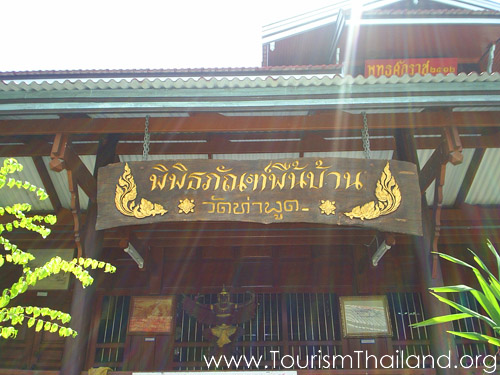 The Wat Tha Phut Folk museum is at Tha Phut temple, Rai Khing sub-district close to the Tha Chin River. The temple is more than 200 years old. Based on the evidence from inscriptions on bricks of the wall of ordination hall, it was assumed that it was built at the end of Ayutthya period in the reign of the King Barommakot by a group of people who had evacuated from Ayutthaya period to escape from the war peril after the fall of Ayutthaya city in 1767 and settled along the Tha Chin River. Rot, a venerable monk, who was the first abbot that held the clerical title of Ayutthaya city, was invited in the reign of King Taksin the Great to stay in the Buddhist temple in the capital because he restored customs and tradition in that period and maintained Buddhism by searching for monks in the period to stay in Thon Buri city. Rot monk preferred to stay at this temple. King Taksin the Great did not object to Rot’s preference but gave many utensils to him such as litters, spittoons, teapots and two barges. In the reign of King Rama V, Tha Phut temple was popular among the royal family-Prince of Jumborn, because major and minor famous abbots in that period were Luang Pho Kaeo and Luang Pho Chuen. In 1997, they had an idea to construct a museum at the temple to be used for study and exhibition of the following three parts: 1.Tipi?aka Hall in the reign of King Rama III showcases ancient objects such as stuff that the King Taksin the Great bestowed to Rot monk, including silver niello ware2.Former monk’s house of the abbot in 1959 displayed the abbot’s utensils, requisites and temple’s property such as glassware, strainers, pottery groped from the river in front of the temple, local wisdom inventions such as ancient wooden toys (Then Ot Phen) to exercise ones’ mind, and aerial photographs.3.Dhamma study building in the reign of King Rama V and VI is a teak structure decorated with wood carving (ginger bread). On the triangle is the seal of Mahamakut Buddhist University, Wat Bowonniwetwihan. On the upper floor, retro newspapers in various periods as well as books and documents were stored in a corner. On the lower floor under the basement, a water wheel was stored. The Wat Tha Phut Museum is open only at weekends and on public holidays from 9 am to 4 pm without any admission. Those interested please contact or ask for more information at 08 1941 6637 (Khun Wirat), 08 9786 4533 (Khun Mana), 0 3428 5582, 0 3432 1122 (Abbot). 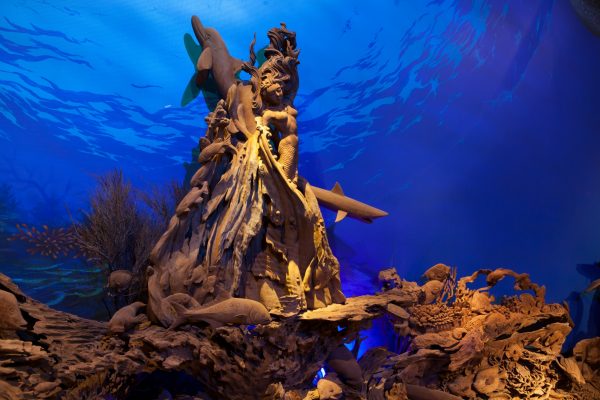 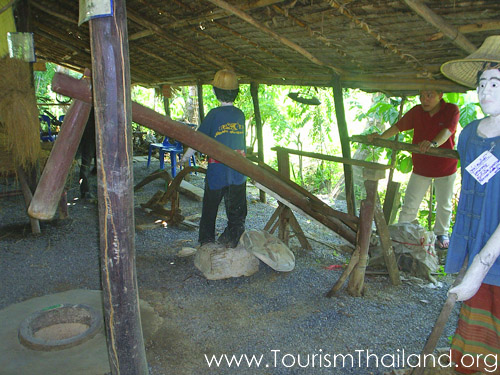