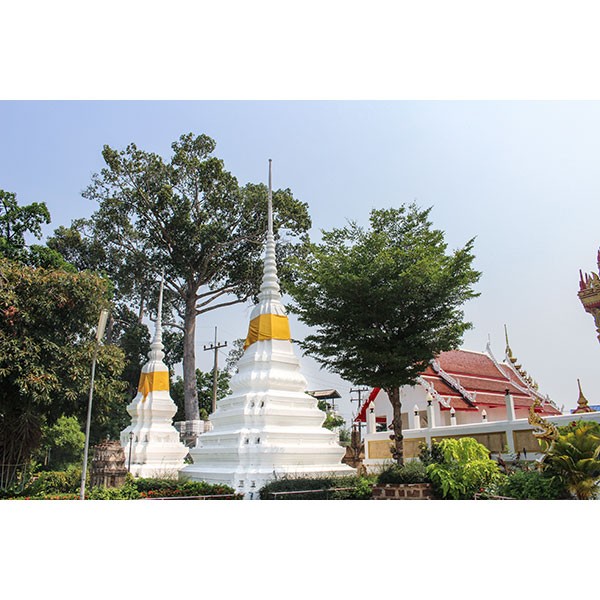 Wat Tamnak is located at Moo 1, Tombon Sam Kok, Amphur Sam Kok, Pathumthani province. It was built in 1817 and received the Wisungkhamsima permission in 1819. At first, it was named Wat Khom or Wat Maikiriek. However, Mon people called this temple as Phae Pha Tae which is Mon language and means the Buddha’s footprint temple which indicates the model of the Buddha’s footprint the temple has. The first group of people who started building this temple was Mon people who migrated from Maotama in King Rama II reign. After they settled down, they built many temples to make merit. There are sacred places, sacred objects and ancient artworks as follow:1.The hall which is extraordinary since it does not have any window, just only one entrance.2.The President Buddha Image in Ubosot hall made of laterite in Ayutthaya period.3.The stone Buddha’s footprint4.The old monk’s dwelling5.The 2 medium-size Ayutthaya style pagodas with reduced angles in front of the hall In front of Wat Tamnak’s hall, it is recorded that in 1818 the written hall walls were built. In 1935, many constructions and creations were made such as junk style hall, using the pole to buffer the weight, no window, covered the floor with European tiles, red sandstone boundary marker and the glass window arch of the monk’s dwelling. Pathumthani or Sam Kok town in the past owned significant history and priceless cultural heritage, just like Ayutthaya. Many Mon migrated to Thailand to live under the King’s virtue. Many art skills were passed on generations to generations until now. The art skills which are passed on from the past until now are in incantation, inscription, consecration on amulets and Raman magic spells. The person who can conduct these art skills is Luang Poh Chom, the abbot of Wat Tamnak, Tombon Sam Kok, Amphur Sam Kok, Pathumthani province. 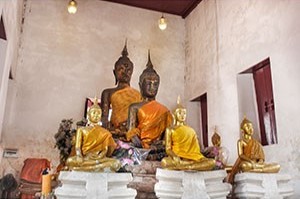