This site was dated back to Dhavaravati period around 11th or 12th century. The majority of locals are Buddhist and Brahmin.

It is believed that this site was the location of an ancient city of the Dvaravati Period with an influence of the Gupta School of Indian Art dating around the 6th-7th century A.D. From the Fine Arts Department’s discovery, they found lots of Dvaravati antiques at Phong Tuek in 1927 such as Roman bronze lamp, Buddhist terra-cotta plaques, Naraya or Visnu image carved from stone, and other Buddha images. Later in 1934, Dr. Wales, a representative of the Antique Studies Association from India, came to explore and excavate more at Phong Tuek and proved that a civilized ancient city used to be placed here around a thousand years ago. Nowadays, some pieces of the found artefacts are kept in Wat Dong Sak and others are kept at the National Museum in Bangkok. To get there, the site is about 37 km. south from Kanchanaburi. From Bangkok, take Highway 323 until you notice the direction sign on the left at Km. 92-93 leading the way to Boran Sathan Phong Tuek. After crossing Chantharubeksa Bridge, pass Wat Dong Sak on your left then go straight on until you get to the Phong Tuek police kiosk on the right. The Boran Sathan Phong Tuek is next to the police kiosk. 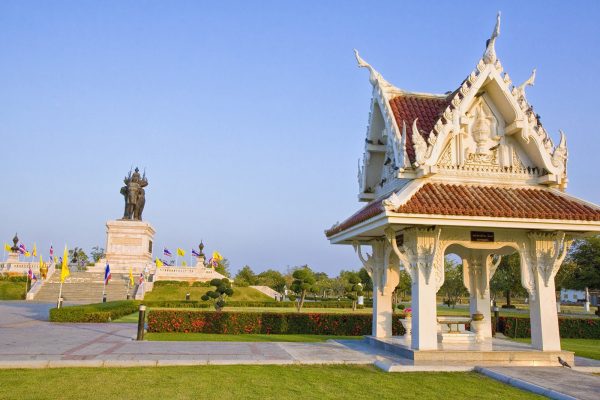