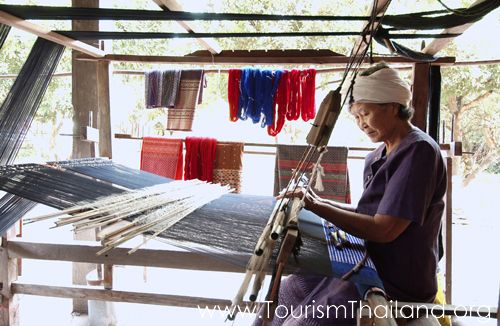 The weaving center of Baan NgongNgeug The NgongNgeug are descended from the Yong living in Yunnan Province, Sibsongbanna Prefecture which is nowadays under the government of Republic of China. They immigrated and settled down in the low land of Ta river in Pa Sang District in the period of 2348-2356 B.E. in the Era of Pra Chao Kawila or the Era of harvesting crops to boats and collecting labors to town. In the early period, there were about 5 families of the Yong which immigrated and settled down spread around the village. Nowadays, the area is a swamp at the east of the village. The streams are originated from wellspringwhich are the same of origins of MuengKlangwaterway. The legend has it that Phaya Naka (or in dialect called Ngeug) which is in the huge size equal to that of the palm appeared in the swamp so the local people named the village that “NgongNgeug Village”. The origin of weaving handicraft of NgongNgeug Village was happened at the same time of settlement of the 5 families of ancestry. The handicraft, in the first period, they made handicraft for domestic use, since, in the old days, housewares and clothes were not available. The Yong men spent their free time from rice farming and growing crops for growing cotton. For women, they would bring the cotton to weave with ancient loom. The clothes that they made including from attire, blanket to towel and for housewares including Toong or Lanna Flag which clearly shows wisdom, tradition, Lanna’s belief and Buddhism. This is because Toong is a symbol of the Yong who use it for indicating their settlement, moreover, they believe that donating Toong, in their life time, which is made from themselves, when they die they can grab the rim of Toong to go to the heaven. The Toong were made with ancient pattern, for example, the basic pattern of Song Ta-kor, the ancient pattern of scale of turtles, the Dee pattern and the pattern of Orange Jessamine. In these days, the NgongNgeug Village is selected as the main representative leader of the weaving center of Baan NgongNgeug Network of Lampoon Province, together with Don Luang Village. The craftsmanship of NgongNgeug village is reserved ancient characteristics of weaving. The NgongNgeug were passed the means of weaving cotton clothing from their ancestors. In addition, the NgongNgeug are creative in adapting the ancient pattern to be more contemporary by adding more detail and making it be more colorful, for example, the pattern of scale-of-turtle candy, the pattern of groups of scale of turtles, the pattern of scale of tiny turtles, the pattern of scale of Ta turtles, the pattern of elephants, the pattern of birds, the pattern of bunches of lotus and the Thai pattern of Kho flower, and so on. So the pattern of the craftsmanship clothes have various patterns and are always modern. 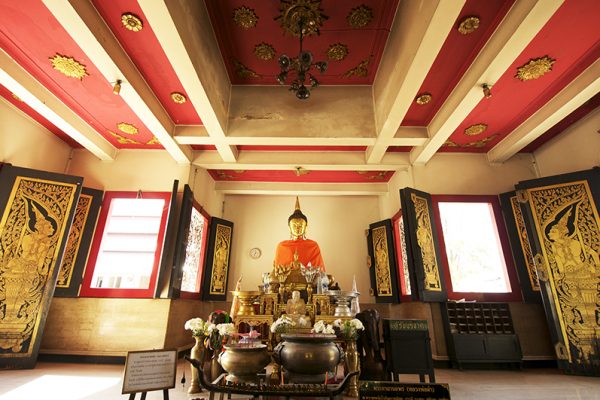 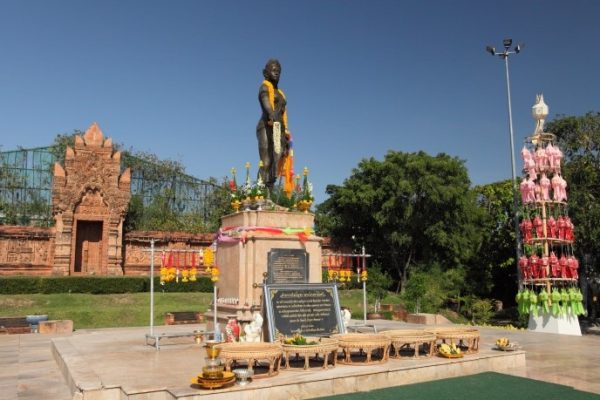