Wat Moo PerngWat Moo Parng is located on No. 3 Moo-Baan Moo Perng in the Sub-District of MuangJee in the Province of Lampoon. It was built in 1797 on an emoty piece of land which was originally a forest area. Today, the temple is still sheltered and cooled down by the breeze offered by large trees of hundreds of years old. As it is peaceful and contains untouched natural area, a lot of wild pigs have migrated to the temple and has taken it as their habitat. The large number of wild pigs living at the temple is where the name “Moo Perng” is adopted. In Thai, “Moo” refers to pig and “Perng” refers to rely on or depend on. The temple was built for the reason that villagers in the area had to travel far away to make merit and practice religious ceremonies, so the piece of land was granted an the temple was built in 1797. It was officially granted Wisuongcamseamr in 1951.Wat Moo Perng is highly respected and popular among people who are borned under the Chinese year of a pig or as the Lanna call it Pee Chang. The temple also attracts people who are interests in stucco and architecture as it offers traditional pristine items including the Kong archway which is a Lanna style form, the HorTrai (scripture chambers) which is different from any other commonly found in Lampoon. It is made of semi wood and cement with a double layered roof adorned by a gable apex and colourful tinted glass. The first floor has got large pillars as support and is where the temple’s main Buddha Image is located. Wat Moo Perng is easily accessible by car. From Ta Jak intersection, travel on Highway 1033 heading towards the District of Mae Ta. Continue through Baan Paan, Baan MuangJee and MuangJee Police Station for approximately 1 kilometer. In case of traveling by public transportation service take the bus route Lampoon -Ta Jak Intersection- Moo Perng- Ta Gard- Mae Ta 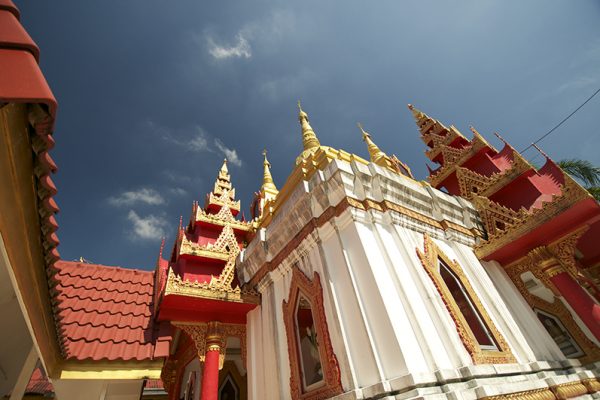